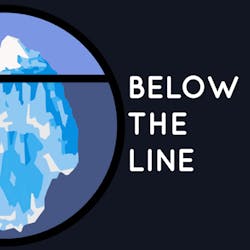 Who is Kathryn McCarron?

Kathryn is a San Francisco based fashion designer and founder of her own fashion line. She was featured in New York Fashion Week at the age of 25 and was also on the cover of Cosmo Magazine.

Who is David Goggins?

He is an ultra-marathon man, a Navy SEAL, and holds the Guinness Book of World Records for the most pull-ups in a day. He has also written the book, Can't Hurt Me: Master Your Mind and Defy the Odds. James and Kathryn agree that David is truly living below the line and the kind of hero that we all need right now.

How has Goggins’ book inspired Kathryn?

She describes how David is such a pusher. While running, Kathryn will gain some perspective from listening to Goggins’ audiobook. She mentions the cookie jar, which is a metaphor of your accomplishments.

Every time you’re proud of something, you’ll put an imaginary cookie in the jar. When you have to do something that’s really challenging, you’ll pull the metaphorical cookie out as a reminder and motivator of the previous things you’ve accomplished, and you'll push yourself to accomplish the next challenging obstacle.

Kathryn started competing whenever she was 21 and described the competition as an uphill battle in her own mind. She viewed herself as the underdog from Indiana. She was born about 20 minutes from Chicago, and she stated how there wasn’t a huge fashion community nor did she know anyone who was in the industry.

Kathryn purchased top designer products and believed that she could create her own designs while in school. Back then, she hadn’t realized there was a difference between being a shopper and a designer. She was proved of how wrong she was when she was in design school and was told by her teachers to drop out because she wasn’t fit to be a designer.

How do you judge good and bad fashion in an academic sense?

The line has to be cohesive and look like it’s been thought out, which includes the same cover story, fabrics, and one that has longevity of what the line is supposed to be in the future. Kathryn states how there’s an amount of science behind creating a line that she didn’t respect or know about prior to going to design school.

What does it mean to create your own luck?

Kathryn doesn’t believe in luck. Instead, she believes that any information suggested to her that could help her become a better version of herself, she is open to do and look into. She references to reading Kevin Hart’s book about him being an overnight success of ten years in the making.

Kathryn states how there’s always a glorified story of once you reach a high level of success, people believe that this person just shows up. In reality, it's a person that has been built over time with lots of failures.

How has Kathryn’s mindset changed over the last 10 years?

She says that a lot of her self-talk has changed because she was meaner to herself in her 20s. Rather than enjoying her accomplishment, she was a lot harder on herself and didn’t feel good about them.

Kathryn was inspired by Michelle Obama’s book relating to her own self-talks. Her takeaway from the book started with the question, “Why not me?” It was easier to shift her self-talk to this perspective as a way to feel good about the things that she did. Overall, she wants to be a better version of herself.

Another change was that her 17-year-old nephew committed suicide. Because he suffered so greatly, Kathryn decided to stop this vicious cycle of talking herself down so her loved ones didn’t have to see it and as a way to honor him. She wants her own daughter to learn how to channel these feelings in a healthy way as she has learned to do so herself.

Besides the New York Fashion Week accomplishment, it was getting her line in stores. At first, she struggled finding stores to accept her line in early 2012. It wasn’t until 2013 when she started attracting stores from all over the world from doing trade shows and self-funding to gain traction and success.

How long does it take to live out your dreams?

James states that for entrepreneurs, it takes 16 months before you see a shift in your progressional curve. He has noticed that within a year, most will quit because they expect their startups to take off within 90 days or a few months.

In reality, James states that it’ll take 16 months of time and effort. Most of all, recalibrate your expectations to be a 16 months period to finally see the results you’ve worked hard to obtain.

How did Kathryn’s career flourish being protected by her brother?

What are two stories that have helped shaped Kathryn’s life?

The New York Fashion Week is the first story because Kathryn felt like she was such an underdog and didn’t believe in herself. After putting in the work, she obtained something that she thought was so out of her reach at the time. She wants others to know that they can get whatever they want, but you have to put in the work, hours, and dedication to get there.

Her second story that’s impacted her life is her nephew’s death. She has become more positive and strives to constantly create a better version of herself. She is choosing to run a marathon for him. Rather than letting this experience shape her in a negative way, she’s using bad experiences as fuel to make her life better. If you start with anger, it can be channeled into something positive and impactful.

How does Kathryn view failure?

Before, she was terrified and paralyzed with fear and humiliation if things fell through. Now, she would accept failure and try again the next time around. Now, Kathryn states that she is braver now and is almost comfortable with failure. She sees failure as being necessary, and that it’s almost like a badge of honor.

How has having children affected Kathryn’s life?

She states how her kids are always watching her. Because of her her children, she wants to be great for them.

What are below the line thoughts or ideas that Kathryn often thinks about?

Restating it, Kathryn does not believe in luck. She references back to Goggins’ book about the 40% rule, which says that we are only using 40% of our capabilities.

She mentions how people look up to founders as being glorified, and this is not the way we should view them. Kathryn states how anyone is capable of doing something that they think is amazing, but they just need to have the courage, heart, and put in the effort to achieving their dreams or ideas.

What is great about having founder friends?

James states that you get to see that there is no single pattern to success. Kathryn suggests that maybe the pattern is founders' grit and perseverance.

What is helpful advice for potential founders?

What helped Kathryn in her mid-twenties is a quote from the founder of Chobani. He says, “You don’t need to swim. You just jump in and learn the swimming from there.”

When she started putting up inspiration, it lead to designing, finding out contacts, then getting into stores. Ultimately, she says that you don’t wait, you just start. There is not perfect time to start, you just do.