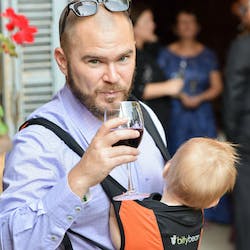 How do you get a job when you don't know anybody in tech?

Aviel came to a Startup Weekend in Seattle not knowing anybody, and left well connected. How did he do it?

He volunteered for a role that nobody wanted, and he did a good job. HIs job, connections, and eventually funding for his startup all followed from a simple act of doing what others would not.

Aviel new both Marc Nager and Clint Nelsen, and he was the one to introduce them to Andrew Hyde and help negotiate the sale of the company.

What are the three phases of startup discovery?

Why should you never start an untitled startup?

Aviel and team founded their company as "Untitled Startup," raised funding without an idea, and did not have a particular idea of what to build.

Eventually they realized they could build a company around Twitter's streaming API. They built a prototype over the weekend, and launched it.

Shockingly, people wanted to pay them for this new product. The team started listening to their customers, and building the tools their customers wanted. They followed the money.

Eventually they changed their name from "untitled startup" to "Simplymeasured."

Now Aviel advises founders to not raise any capital at this stage. He says you should not commit to playing a game, until you clearly know the rules.

What is the most common mistake for founders turned VC?

Founders who become VCs often imagine themselves in shoes of the founders who pitch them. In reality though, everyone is on their own journey, everyone has their own issues going on, and everyone's experiences are unique. It helps to understand.

Is being a dad similar to being a boss?

Aviel says that is an illusion. A parent is more like an advisor. You can't tell your kid what to do, they have their own agenda. All you can do is guide them.

What is Aviel's favorite memory of his child?

The first time his kid laughed, unconstrained and magical. That was the point where Aviel realized his baby was really keen on living, on being alive.

How does a relationship changes after having kids?

What's the best way to manage work while having a brand new baby?

"For the 1st 6 months, you're gonna be in reactive mode, like if you're trying to learn a new skill at work. I learned a new muscle. It's like lead an initiative. You're not going to be doing it justice, especially for the 1st 6 months, because you're trying to readjust your own life and figure out who you are. So I think being having a good support network and being realistic about what you're going to be able to accomplish and then also practicing the ways that you're going to need toe work rather than suddenly being blindsided by the fact that you have all these other priorities. There's something I would encourage everyone to do, and I definitely have the support network. But I was I was probably missing the other two in ways I should have had." - Aviel.

Can you work smarter, instead of working harder ?

If you can figure out how to make less decisions, but make them better, that is one version of working smarter rather than harder.

How can you be with family on a busy work travel schedule?

Aviel started taking his family to every one of his work trips. This way he gets to be with his family, and they get to travel.

What is Aviel, the dad, mostly excited about for the future?

Aviel wants to see his son grow up so they could start having actual insightful conversations together.