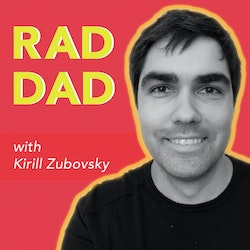 Rad Dad, hosted by Kirill Zubovsky
Before and After of having a baby - Anthony Armendariz - Partner and Head of Design at Funsize

► Who is Anthony Armendariz?

Anthony is a co-founder and partner at Funsize, a creative design agency, which he started with his wife, Natalie. They spend years been laser focused on business, working day in and day out to make sure their business can now account Facebook, Oracle, Adobe, EA, AT&T and many others among their successful customers.

► How did Anthony feel shortly before the arrival of their baby?

He was screaming on the inside, while portraying calm and collected on the outside.

► Why was Anthony so scared about having a child?

He's spent decades working on growing his business, and being very selfish in a sense that he, Natalie, and their business were a priority. A child would sure demand to be priority number one, and Anthony was not sure if he would be able to accomodate.

► What is the upside of being a business owner when raising a child?

A business owner has the the luxury of taking off as much time as they want and still make a paycheck. They can work from home, whenever, and to make their own rules. Overall, having a profitable business allows the owners to design their future; it's a very lucky position to be in.

► What is the acceptable amount of falls, cuts or scrapes a family can expect without having to freak out?

Little kids are flexible and generally are pretty good at not getting hurt. Once in a while they will get hurt, but they seem okay shortly after. Kids are supposed to experience scratches and bruises, it's part of growing up.

► What was Anthony's expectation for the role of their child in their life?

Before having their first baby, Natalie, Anthony's wife, was the most important thing in his life, and Anthony was worried that baby would mess things up. They were hoping to rectify this by making sure that this new baby was going to be integrated into their life, as opposed to them complying to the needs of the baby.

► What positives post-baby changes was Anthony looking forward to?

"I am excited about changes in my life. I think that it would be good for me as a human being to be healthy personally and to be a good husband and to be a good leader. I think going to bed earlier and waking up earlier in general would be life-changed for me. I think having more responsibility outside of work and becoming less one dimensional, where work would not be the most important thing in the world, that's very healthy."

► What did Ant and Nat do to prepare their business for the birth of their child?

Anthony and Natalie, being the co-founders and partners at Funsize, knew they had to prepare the business for the time when they would be unavailable, while attending to their new baby. They needed to make sure the company could run without them, indefinitely.

They started by clearly defining all roles and responsibilities, growing their company and building a leadership team in the process, figuring out the growth plan, and putting other people in charge of their own tasks.

Anthony also mentioned that having a great CFO was crucial to knowing they would not run out of money.

► How did Funsize founders prepare their personal life for the birth of their child?

They bought an investment house that could generate passive income, and hired Natalie's parents to be their full-time help. This way the grandparents would feel better about spending quite a lot of time with their grandkid, and the child would have the best care (family) that he could get.

► How should dads think about scheduling their paternity leave?

Anthony recommends breaking your leave into chunk and not necessarily taking it all upfront.

In their case, Natalie's parents were going to be around to support mom and the baby, so it did not make sense for Anthony to also take time off. Instead, Anthony planned to take a little bit of paternity leave at the beginning, and then more in the later months.

► How did Anthony's attitude to work change after having a baby?

Anthony says that after the baby was born, he found himself wanting to spend time with his child way more than to be with anyone at work. He did not stop working of course, but instead reprioritized his tasks to make sure that he focuses on 10-20% of the most important business, and let his colleagues handle the rest.

► What was the most terrifying aspect of being a business owner and starting a family?

Anthony was worried that his wife and his business partner would not return to work, thus losing her talent and skills and possibly jeopardizing their business. He was also worried something else would happen to the business because they were not paying as much attention as usually.

Turns out, those fears were obsolete. Their college raised to the occasion, and the business is now doing better than ever.

► Why didn't Ant and Nat put their baby through sleep training?

They read a few medical reports explaining that some babies cry to help them go to sleep, but others really need an emotional touch. Crying doesn't help them go to sleep. It actually makes them more anxious. The studies show that that personality never changes and if you have a baby that needs emotional support, you are essentially abandoning them in the most anxious and stressed out moment. Furthermore, there's a strong link to sleep training with those kind of babies and a lifetime of depression.

► What is a good way to achieve work-life balance for a business owner?

Anthony was at first scared to scale the company and to implement all sorts of changes that shifted a lot of his tasks onto other people, but after doing so, he said it was the best decision.

If they did not have a bigger team, or promoted key people into leadership, it would have been a lot harder for the two business partners to step aside and to spend time with their family. But now, the business is better off and thriving !

► How would Anthony change their paternity policy now that he understands parenting first-hand?

"Oh, my God, I would double or triple it.

It felt like we created something that was pretty good for a small family owned business. But even at that, it was just not enough, especially for moms. I mean, watching Natalie go through what she went through, they're just super heroes!

Of course, it's hard because, you know, if you're if you're a heavily funded tech company, maybe you can give people six or nine months leave, but when you are client services company and you're depending on creating for your clients, it is a lot harder.

I think people everywhere should just be given more time for their kids, but if they cannot, maternity and paternity program at least need to be flexible, letting people choose when to take their time off, and to take it in chunks.

Mother, mothers should really should be given a proper time off and proper flexibility." ~ Armendariz.