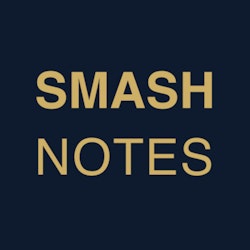 Smash Notes
Special interview with Mubashar Iqbal, Product Hunt Make of the Year for 2016 and founder of Pod Hunt, WILL ROBOTS TAKE MY JOB, plus 80 other projects.

► Who is Mubashar "Mubs" Iqbal?

Mubs is a developer, dad, and a maker. He loves to code and to create products for himself and his friends, and to date, he has created over 80 different projects. Take a look at the list of projects by Mubs, it's extensive!

► Why is Mubashar working on so many projects?

He loves it, and has been doing it for a really long time.

Mubs has been coding since he was 8 years old, he studied it in university, and then worked as a web developer. He truly loves to code, and takes any free time to do it as his hobby.

► What is your super-power?

Mubs says that he truly does not need a lot of sleep. Once the kids are in bed and the day job is done, he is able to stay up and work into the night, 2-3 in the morning, then get some sleep and be up again at 6am to start it all over again.

► What is the hardest part about making side projects?

Coding is the easy part, especially with all the click-and-drag tools available today. It is a lot harder to figure out what it is that you want to build, and to then get people to use it.

p.s. Looking for a no-code tool to start with? Try Webflow!

► What do you think about no-code movement?

Mubs sees software as a tool that enables people to solve problems. If you can solve a problem, using whatever tools are available to you, that is great.

► Is Mubashar Iqbal trying to start the next unicorn?

Mubs says that building a unicorn is not one of his goals. He is simply trying to solve his own problems, and sometimes those of his friends. If it turns out to be a good business, so be it.

In fact, he thinks the world is chasing the hustle culture too much. There is a huge value in enjoying the process of creating things. It's important to enjoy yourself.

► Have Mubs been able to make money with his side projects?

Absolutely! Although many of the projects haven't worked out, there are many that are still operating and employing people.

► How much is a Bitcoin worth?

During the hay days of Bitcoin, Mubs was curious to track the price of bitcoin, so he built a tool - HowMuchIsABitcoin.com.

► Why did you start working on PodHunt ?

Product Hunt used to have a games, podcasts, and books category. They eventually shut them down to focus on software. Mubs and his friends have been missing the podcast category though, and given the rising popularity of podcasts, it seemed now was a good time to launch PodHunt.

► What outcome would make Mubs happy?

Mubs says he has pretty low expectations for the outcomes of his project. He does not have VC funding, nor does it really cost him anything outside of his time. He does not have much to lose, only the upside to gain.

PodHunt feels like a long-term project, given how much the industry is growing. At the same time, he cannot predict where it goes, so it makes sense to keep making stuff and following along, and to catch the waves as it comes.

[editor's note:] Mubs shared this after we ended recording: WillRobotsTakeMyJob was a cool weekend project he created with a friend, which got millions of visitors, got him coverage on Lifehacker, Fortune, Mashable and many more. They eventually sold that property to a new lucky owner. So much for a weekend project ;)

► Have you heard of the Palm phone?

Palm is a little phone, the size of a credit card. It runs Android, has a camera, and is able to do everything your normal phone does.

Palm is a great phone for your family members that don't need a shiny new iPhone, as well as a fabulous second phone for anyone who wants to spend more time in the physical world.

If you'd like to try it out, go to Palm.com and use the discount code "raddad" to get $50 off your purchase, while supplies last.

► How is it possible to work from home for 20 years?

During the first internet bubble, a company he was working for went bust, so he got another job, but needed to move away from the New York city. Talent was scarce, and he was good, so even though the concept of working from home was still entirely new, they encouraged him to keep working.

► How did long commute hours encourage Mubashar to seek working from home?

During his first job, Mubs would spend over an hour sitting in traffic. He tried to beat the traffic by leaving the house super early in the morning, but three months in, he had enough of both. Work from home seemed like a much better option.

► What do friends know about Mubashar that most people don't?

Every failure is a learning opportunity. Mubs is a very positive person and he does not get held back by failure, instead he uses it to propel himself forward.