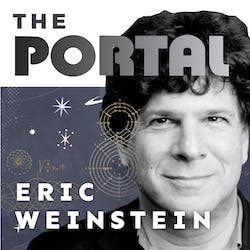 What is The Portal podcast about?

The Portal is a podcast by Eric Weinstein where he tries to explain the world around us, and to break the bubble we live in. Eric attempt to look beyond the intellectual laziness on traditional media, and to understand the viewpoints of people who are seeking ground-breaking ideas, meant to upend our future.

Where are we as the society?

The society have accepted that what was once a dream, the Star Trek future for instance, will in fact remain a dream, a world for children's imagination, but certainly not something that will actually be possible in the near future. Very few people still believe that a drastic change is possible.

What is the biggest problem with science today?

We evolved into the world where before a scientific discovery is even attempted, we cap the potential of our thought by forcing the science to agree with the results of the experiment, through the process of scientific method. The results are then put up for a vote, where the success and failure is largely depended on peer-review, a subjective judgment of a collective.

How can we save the world from a disaster?

We can start to dream again, aggressively and in public. We can unlock the potential of human imagination, give it room to grow, and remove barriers from ideas. We can and should declare the war on stasis and group-think.

How is The Portal going to declare the war on groupthink?

Previously, large news networks like CCN and Fox have been the narrative-makers. They would curate and create content, shaping the mindset of their audiences. Their positions were often defined long before the facts of the matter were known. We now have the individual power to compete with these networks and to unearth the truth on our own.

Who is funding The Portal podcast by Eric Weinstein?

The Portal was offered to be fully supported by a wealthy billionaire, but they decided against it, hoping to struggle with advertising like other podcasters, in hopes to find a healthy and sustainable revenue stream that can be applied to a larger group of creators.

Why is Eric Weinstein frustrated with the way science is presented today?

Top quality scientist often dumb-down subjects in order make their complex ideas seem reachable for the general audience. This is problematic because it creates a state where once the audience doesn't understand something, their understanding of it is immediately influenced by the broadcaster.

Instead, we should not assume and let the audience dig in and figure out the intricate complexities on their own, enabling the audience to participate on a higher level of consciousness.

How can we enable ground-breaking innovation?

According to Eric Weinstein, our survival depends on the theoretical physicists. As their occupation continues to be underpaid, now is a great time to enable them to dream of the future, and invent it while at it.

What is the portal?

The portal is the search for some way out of the bubble we live in.