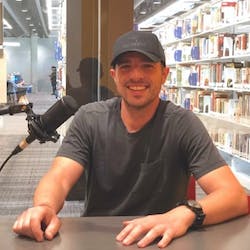 Jason Schuller. Press75 and how a WordPress theme set an entrepreneurial journey in motion.
Geek At Sea
Smashnotes
0:00 0:00

Who is Jason Schuller ?

Jason is the founder of Press75, a WordPress theme company that he founded by a lucky accident. After working on his business for many years, Jason eventually sold it and focused entirely on his family.

What sparked the desire for a WordPress theme business?

While working at the Boeing, Jason realized the capabilities of WordPress and the community growing around it during its inception.

Why did WordPress gain such popularity in early days of web development?

For many organizations, early web meant a collection of static HTML pages that were individually uploaded and managed. It was very inefficient and hard to maintain. With WordPress, you could create a theme, and power all the websites with a single installation.

What is a good way to gain a following for your business?

WordPress was an open source community and Jason quickly gained a following by sharing his progress, and by giving away ideas and tools for free. Even though WordPress itself was in its infancy, the community was very active and growing. Getting in during the early days was key.

How did Jason’s parent react when he left the cushy job at Boeing and traded it for a startup?

When Press75 started, nobody but Jason really got it first. Jason's wife was skeptical, even though revenue was already piling in, and it took her a few months to come around, and then to eventually join the business. Jason's parents, although very proud of his accomplishments, don't exactly understand it to this day.

How did a failed client relationship catalyze Schuller’s entrepreneurial journey with Press75 ?

Jason has always had an interest in video and video-centric content. At one point,he had an idea to create a really cool Hulu-like WordPress theme. He put out an initial version for free, and got connected with a client who wanted to commission and extended edition.

When the advanced theme was done, the client did not pay. Partially angry, and partially curious, Jason put the theme for sale, for just $5. The theme took internet by the storm, and just hours later generated enough income that it was obvious, a theme business was brewing.

What impacts did starting a business as a husband and wife team have?

It strengthened Jason & his wife's relationship because they could both pursue things they wanted to - something that was not 9 to 5 office-related. It allowed them to live differently in a way they wanted to.

What would Jason do differently if doing Press75 all over again?

Jason says that because the business was doing so well, he got very wrapped up in the day to day. If he were to do it again, he'd spend more time traveling, and living a life.

What is important to keep in mind when starting a business and experiencing a great deal of financial success?

Don't become too wrapped up in the excitement. Utilize some of the freedom with starting a business to enjoy things that bring joy - travel, spend time with loved ones, etc. Don't always make the business the ultimate priority.

How much money was Press75 making in its glory days?

Within six months, Jason and his wife were making around $16,000 a months, and ten months in he was up to $30k per months. It was mostly profit, and mostly passive income.

What was the biggest challenge as Press75 grew and gather competition?

As the WordPress popularity grew, Jason Schuller and team had to find more creative ways to stay relevant. With more funding and more resources, his competition was moving beyond themes. They were expanding rapidly, and Jason could not catch up.

Today Jason realizes that instead of trying to catch up by himself, he should have either stuck to his original vision and customers, the ones who did not need new shiny features, or he should have followed suit and hire a lot more people to stay on par with the competition.

Is it best for an entrepreneur to follow their customer base and continue building products geared towards them ?

It depends. An entrepreneur should determine what brings them happiness and what they want to spend their time on as far as creating product.

How did WordPress business and community change with rising popularity of WP as a platform?

The original community of WordPress makers was a tight group that built friendships around their passion. They had WP theme businesses, but they were never trying to compete with one another.

When WordPress got really popular, money was plentiful and new entrants were trying to get all of it. WordPress started to change, with more focus being not just on themes, but plugins, and page-builders. Anything that could create a new line of business and to differentiate the new players.

Who did Jason sell his WordPress theme business to?

He sold to a custom WordPress theme agency. This agency captured the need of customers looking for themes and those developing them.

How did selling a business and then having a baby impact life overall?

It was a wakeup call. Things are put into perspective when you are looking through the eyes of a child and the responsibility of raising them.

How does one channel life experience into their children ?

It is hard to find a balance of career and parenthood. It is important to instill the idea of not giving up in children. They need the grit to handle the outside world.

How do parents decide what is right for their children?

It is difficult to know. There are aspects of how one was parented that are implemented into their own parenting style. There are other aspects of one's childhood that they may choose to not implement with their own children.

How are work/life balance opportunities different today vs. just a few decades ago?

Previous generations did not have opportunities with the internet like there are today. There are so many mediums and much more accessibility for one to make a living and still be actively engaged in the day-to-day lives of their children.

How do parents teach their children how to work hard ?

It boils down to what one is interested in. People should strive to work hard towards what they are interested in, to be conscious of opportunities that come from those interests, and understand the work/life balance that works best for them and their personalities.