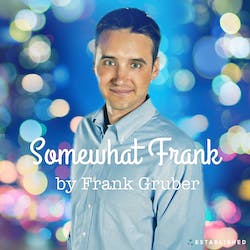 you're listening somewhat frank with me. Frank River. After working in the corporate world for decade, I decide to blaze my own path. Co founding Tech Cocktail, which helped catalyze local start up communities, eventually turned into Techo media site, which grew to millions of readers and was eventually acquired past decade. I've interviewed problems of entrepreneurs and thought years from some of the fastest growing, most successful companies in history. In a long way, amazing lessons from my experiences. So we're gonna talk about startups, tech innovation in the intersection with personal life and anything else on Frank Gruber's mind. So let's get started. Being somewhat frank, Somewhere Frank is produced with the help of established mining company Scooter

Frenzy. There's E scooters everywhere south by Southwest in Austin. They pretty much taken over the city, and I mean, it's pretty amazing. I mean, I was there last year and they didn't see nearly as many scooters. I saw maybe a few, and within a year they've just hatched everywhere. It's, um it kind of reminds me of if you ever been to Taiwan or Taipei, there's, you know, the actual mo peds everywhere, just parked everywhere well in AUSTIN, Texas. There's just scooters everywhere.

It's pretty amazing. It's, I would say, somewhat dangerous. After being there for about a week, Um, I almost got hit by a scooter. I had a friend fall off a scooter and get hurt pretty bad. I saw others almost get hit by scooters. I almost hit somebody. We opening a door with a scooter. So this episode is really about scooters. And obviously it's a great big startup opportunity, right? I mean, we've got lime and bird and spin valued in the billions at this point in a very short period of time,

with big players like uber and alphabet and others jumping in and funding the growth of these these scooter startups and I get it, you know, it saves them the short right, right? So all the ride sharing companies they get, they get, you know, they pick up all the rides and when they didn't have scooters, you know, these drivers were taking people three blocks right, and that's a short ride for the for the driver, and they have to go back in the queue, and it really doesn't help anybody in that system. And so, by adding the scooter and a lot of somebody just take the app and simply go on and take the ride and on a scooter. And the problem is that it's almost like a toy.

So my sense in my just short time being sensing what people are doing. I noticed that because it's so easy, it's an app literally. You go up to the scooter and you take your uber lift app or another app and just open it up and just scan a code. And all of a sudden you've got a scooter and you're able to go 15 miles an hour down the road, which is pretty awesome. In the old grand scheme of things. The problem is the obstacles you've now got. You know, people, you've got other cars that don't necessarily see you. And in most cases, I did not see anyone with a helmet. So they're not giving away helmets with these scooters, So that's obviously a big issues. So all my safety frank alarms were going off in Austin,

Texas, all at one time. But I did see, you know, lift. For example, they sent out before, you know, prior to south by Southwest, they had an agency pull together something. Call the guy just good. Scoot, scoot ticket, which you know is a playoff on etiquette. Not sure that many people saw it because I literally saw people going down the wrong way on a one way street at night on Sixth Street in Austin, Texas,

which, you know, not a good idea any time, let alone night, let alone south by Southwest. So just really concerned. I think they had one fatality in Austin already on. Guy actually was with a rideshare provider when he actually shared where it was because we went on the same kind of route one of the days. And, you know, it's one of the things you just not gonna be seen by a car. I mean, that's the thing. It's similar to a motorcycle. And even if you have motorcycle skills, you may not be ready.

Oh, to reform them on the scooter because you're taking a joy ride. You're literally on a fast moving scooter that you didn't really know You're gonna get a minute ago, and all of a sudden you're flying, so it definitely opens up a lot of opportunity for improvement, you know, Obviously the first step is the guide, like the one they sent out. But, you know, I think another. You know, it's great to have the message out there, but it's probably better to have it in the hands of the rider. So some kind of like opt in or something that may already have this when you're when you're riding to make sure that you know the safety like you can't go on sidewalks, right,

you're not supposed to go on sidewalks yet. I saw people flying around sidewalks and almost hitting pedestrians, which I was one of. I almost got hit by a couple different scooters. So I understand it feels safer to be on a sidewalk, but this is supposed to be on the road, and that's what you just signed up for. So anyway, that's one thing. I mean, the other thing is, you know, providing helmets like No, it's, you know, the guy that they provide lift provided has,

you know, wear helmets. And I'm sure that uber saying the same thing and and all the other providers are doing the same. But at the end of the day, people aren't carrying around their bike helmets with them, and there aren't providers for that. So that, to me, lines up amazing opportunity for a start up to come in and just create that opportune create that create that solution. So in one way, it's like, you know, if you had it like a vendor, some sort that was tied into all of these that allowed you to have, you know, helmets right there.

Maybe they're disposable and could be cleaned or use that Be amazing. Um, I'm sure there's somebody out there doing something similar. I've seen foldable helmets. One of the companies from our start of the year program last year's out of Brooklyn called Park and Diamond. And they had had a situation where one of the co founders had a situation where relative got injured in an accident without a helmet. And next thing you know, we created a helmet that folds up like a bottle, you know, the size of like, a a, um, a water bottle. So you could actually carry that with you, Not to mention their super stylish. That's the whole thing,

is like you're not the other things. You don't really want to be wearing a helmet all all around. If you're going to like a business meeting or like, you know, whatever, even just going out. You may. If you spent hours on your hair, you may not wanna mess it up right. So bottom line is there need to be some kind of safety measure in place. Thes scooters are obviously saving people time jumping around the city quickly, obviously saving the bigger ride. Share companies time by offering these these other alternative options. But at the end of day, you still need safety to come first. And so there's gotta be something.

Steps it up, whether it be parking diamond, getting a huge partnership to be able to offer these thes helmets to people. Or maybe there's a provider that allows it to happen kind of as you, you know, as you grab the scooter. Maybe it's right there. It's a dispenser, and you just shoot you out and you go. You got your your your safety because it's it's dangerous. Probably a lot of fun, but super dangerous and just worry that's gonna get, you know, get some people hurt or killed. So, Anyhoo,

let's end on a positive note. The opportunities there folks gratin and solve the problem. These scooters. I don't think our going away anytime soon. They're everywhere and I'm assuming they're going to continue to migrate to number of cities around the country. Austin being one of the one that's already been hit as well is probably L. A and others. So in San Francisco, so definitely, uh, scoot with with caution Don't scootin. And, uh, I guess don't drink and scoot and be careful when you're when you're getting your scooter to provide t wear some kind of safety measures in place because your life matters more than just a quick

joyride. That's a wrap. Thanks so much for listening. This is somewhat frank Signing off Frank Ruber. Oh, and don't forget to subscribe online. ITunes, soundcloud, android Wherever he can find it somewhat. Frank podcast back soon, another upset.