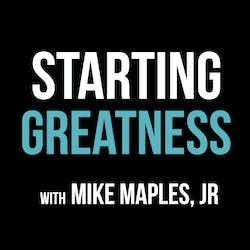 Lessons of Greatness: Why You Need to Nail a Niche before Going Big
Starting Greatness
0:00 0:00

the technology option lifecycle idea itself says when you introduce a disruptive innovation into any community, it will self segregate into different adoption strategies. This quote from Jeffrey Moore alludes to a key lesson of greatness. To get massive in the future, you have to appeal the tiny and passionate niches. First, let's explore Why

Welcome to starting greatness Podcast dedicated to ambitious founders who want to go from nothing toe awesome Super fast. When you're a startup founder, you have to channel your inner James Bond. You're MacGyver. You're Wonder Woman. I'm gonna help you win by curating the lessons of the super performers. But before they were successful. So without further ado ignition sequence, let's get started. One of the most counterintuitive lessons of startup greatness is that to get big, you have to start small. Why is this and crossing the chasm? Jeffrey more clearly lays out a very important idea. All technology products

have an adoption lifecycle. Startup products initially appealed innovators. These people like to be the first to try the newest thing. They seldom spend a lot of money, though, but they're super important because the curate new ideas for everyone else who follows Then come the visionaries. These people are the Trailblazers who are living in the future, and they see an opportunity for a new product to solve a burning problem that's blocking that better future. They're willing to take a leap of faith on a proof of concept. But then come the pragmatists. No matter how well the product serves their needs, they need social proof to buy. They have to see that other people are getting value from it. And B to B. They're more motivated by not getting fired than by living in the future. And for a consumer product. They start using it when they feel left out,

because all their other friends are starting to use it. So Geoffrey Morris notion of the chasm lies between the visionaries and the pragmatists, and the gap between them. And this, unfortunately, is where a lot of startup dreams get stuck and die. Jeffrey Moore shows us that a startup needs to dominate a niche of passionate, visionary early adopters, but then expand from that position of strength, too early niches of pragmatist buyers needing social proof. But sometimes in their eagerness to be the next big thing, founders often ignore this critical lesson of greatness. They attempt to skip the early adopter stage and move straight to the pragmatist buyers. Since the market is orders of magnitude bigger, it seems logical on the surface. Who wouldn't want to go after the biggest total available market?

And don't veces already say that the size of the market is the biggest factor in success? In fact, VCs who want hypergrowth often get in the way, often giving bad advice to founders. Often they're the biggest part of the problem. The problem with skipping the early adopters is that you run into a Catch 22. The early majority pragmatists won't buy until they see others like them are buying. They will be happy to meet with you, but they will sap you of your energy and meeting after meeting in my career is a founder. We had an expression for this. Yeah, Ghaem. Yet another good meeting. Counterintuitively. The best way to get big in the future is to start small now in the area where you can dominate the most quickly look at any startup that achieved greatness. The overwhelming odds are that it dominated a niche before going to the broader opportunity Facebook started at Harvard and then Ivy League universities than all universities.

For many years, you couldn't even join without a dot edu address. EBay Focus first on collectibles linked in targeted V. C's in Silicon Valley. Google ads initially appealed to start ups who didn't have the money to run. Yeah, who's more expensive? Banner ads. Amazon started with books. You could probably see the pattern here. Each company added functionality and addressed a broader audience over time, not from the very beginning. So what can you do to nail your early niche? There at least five characteristics to look for. First, you want to have common desperation.

The ideal situation is a set of cross reference, a ble customer prospects, all of whom are desperate to solve a particular problem. Ideally, they've already tried to solve it. But no solution that lives in the president's good enough. When they see your product, they should ask, Where have you been all my life? They should be desperate to see you again and should be pushing you to deliver a solution that solves their desperation immediately. A common mistake people make when they solve for this is to say customers are desperate for my product when that is what they offer. For example, customers are desperate for better analytics because they sell better analytics. But the absence of your solution is not the valid definition of desperation. Desperation has nothing to do with your product, and it has very little to do with you,

in fact, and everything to do with why someone is desperate. Second, you want to offer tangible results. What do I get if I use your product? The mistake here is to be too high minded and theoretical. For instance, a bad answer is peace of mind or more engaged employees or happy customers. A better answer is grow leads by 500% or double your net. Promoter score 90 days. Third, you need a believable solution. Your product needs to be focused enough to crush the target job to be done. You can't just wave your hands, and you can't just have the product perform according to a speck, you have to achieve the outcomes the customer seek.

They have to believe you could deliver the solution to their desperation for real, and they have to believe that they themselves can deliver on their end of the bargain as well. This has to do with them as much as you. They need to believe that you can do what you say you will do, but they also need to believe that they have the ability to make the solution work in their organization or their own life. Often you'll find that the customer doesn't believe in their own ability to make your solution work, but they have too much pride to tell you. Case studies and word of mouth, or especially important to build on this front forth you need tangible targets don't make the mistake of being abstract here rather than stopping it. Well defined personas You want specific names of specific people at specific customers, and you want to understand the precise criteria for why they're on your target list. Fifth, you need to demonstrate your difference in a way that causes people to root for you. You want to do something that causes people to believe that you think different, that you are one of a kind and not a commodity with lift. For example,

it was a simple is a pink mustache in the early days and with check. It was the blaze orange boxes that contain books along with the slogan, Don't buy it. So what does this mean for your startup? Well, you're far more likely to succeed when you define a niche to nail in the early days. It's tempting to say yes to a lot of opportunities and go after the biggest market opportunities the quickest. But it is far better for a start up to start out small, doing less, but better on the path to expanding. First, you build a focus product that leverages your unique insight and appeals to a small, passionate audience that is desperate for what you deliver. Over time, you build a whole product that appeals to an ever broadening audience on your way to greatness. And while you're at it, if you haven't read crossing the chasm, it should be at the top of your reading list.

Thanks for listening to starting greatness. You could follow me on Twitter at em to J. R. Please shoot me an email with any comments or questions to greatness. A floodgate dot com. I hope you'll subscribe on apple Spotify or wherever you get your podcasts, and if you like the show. I'd be grateful if you could leave us a review on apple podcasts. Never let go of your inner power to do great things in whatever matters to you. And until we meet again, remember, greatness is a decision.