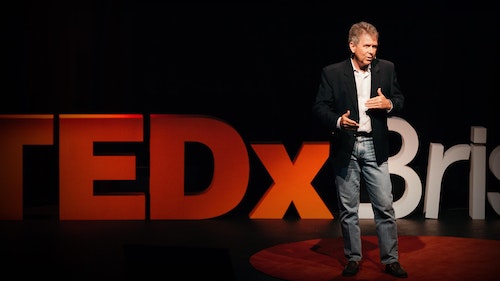 Choosing to marry and share your life with someone is one of the most important decisions you can make in life. But with divorce rates approaching fifty percent in some parts of the world, it's clear we could use some help picking a partner. In an actionable, eye-opening talk, psychiatrist George Blair-West shares three keys to preventing divorce -- and spotting potential problems while you're still dating.

What is the most important decision you can make?
What are some of the most distressing human experiences we can have?
What do we know as a modern society?
Why isn’t there a divorce campaign?
Is it good to have sex outside of marriage?
What are the three reasons you should get married later?
What are the twenties?
What makes relationships most stable and happy for a longer term?
What pulls relationships apart?
What are three life hacks for preventing divorce?
download episode
0:0

0:14
What are some of the most distressing human experiences we can have?


There are experiences on the list, such as death of a spouse, divorce, marital separation, imprisonment, marriage, and other events.

Almost 50 years ago, psychiatrist Richard Rye and Thomas Himes developed an inventory of the most distressing human experiences that we could have number one on the list. Death of a Spouse but to divorce. Three. Metal separation now generally, but not always. For those three to occur, we need what comes in Number seven with List, which is marriage. Fourth on the list is imprisonment in an institution. Now some sign number seven has been counted twice. I don't believe that when the life stress inventory was built back then, a long term relationship pretty much acquainted to a marriage. Not so now. So for the purposes off this talk, I'm going to be including defector relationships, common law marriages and same sex carriages or same sex relationships.

Soon, hopefully to become marriages. And I can say for my work with same sex couples the principal principles I'm about to talk about a no different. They are the same across all relationships. So in a modern society we know that prevention is better than cure. We back tonight against polio, diphtheria tetanus, whooping cough, measles. We have awareness campaigns. Melanoma struck diabetes all important Cam pines. But none of those conditions come close to affecting 45% office. 45%. That's our current divorce, right? Why No prevention campaign for the voles?

Well, I think it's because our policy makers don't believe that thing's like attraction on the wire. Relationships are built is changeable Educ a ble one? Well, policymakers currently a generation eggs. They're in their thirties two fifties. When I'm talking to these guys about these issues, I see their eyes glaze over and I can see them thinking, Doesn't this crazy psychiatrist get it? You can't control the way in which people attract other people and build relationships. Not so our dear millennials. This is the most information connected, analytical and skeptical generation making the most informed decisions of any generation before them. And when I talked to Millennials, I get a very different reaction. They actually want to hear about this.

They want to know about how do we have relationships that lost. So for those of you who want to embrace the post romantic destiny era with me, let me talk about my three life hacks for preventing divorce. Now we can Inter inter vein to preventable was two points lighter once the cracks begin to appear in an established relationship or earlier before we commit before we have Children. And that's where I'm going to take us now. So my first life hack millennials spend seven plus hours on their devices, a day American diner and some sign probably not on raising me. This is probably affected their face to face relationships indeed, and add to that the hook up culture ago, abs like tinder. And it's no great surprise that the 20 somethings that I work with will often talk to me about how it is often easier for them to have sex with somebody that they've met and have a meaningful conversation. Now some say, this is a bad thing. I say This is a really good thing. It's a particularly good thing to be having sex outside of the institution of marriage. Now,

before you go and get all moral on Lee. Remember that Generation X, the American Public Report they found that 91% of women had had premarital sex by the age of 30 91% It's a particularly good thing that these relationships are happening later. See boomers in the sixties that we're getting married. That's an average eyes for women of 20 and 23 for men 2015 and Australia, that is now 34 women and 32 for men. That's a good thing, because the older you are when you get married, the lower you go divorce, right? Why? Why is it helpful to get married later? Three reasons. Firstly, getting married later allows the other to preventers of divorce to come into play. They are tertiary education,

and a higher income tends to go with thirst for education. So these three factors all kind of get mixed up together. Number two Neural plasticity Research tells us that the human brain is still growing until at least the idea 25. So that means how you're thinking and what you're thinking is still changing up until 25. And thirdly, and most importantly to my mind is personality. Your personal at the age of 20 does not correlate with your personality at the age of 50 but your personal the age of 30 does Karl like if you personally beat the eyes of 50. So when I asked somebody who got married young, why they broke up and I say we grew apart. They're being surprisingly accurate because the twenties is a decade of rapid change and maturation. Sorry. The first thing you want to get before you get married is older. Number two. John Gottman, psychologist and relationship researcher, can tell us many factors that that car light with happy,

successful marriage, but the one that I want to talk about is a big 1 81% of marriages employed self destruct. If this problem is present, the second reason won't want to talk about here is because it's something you can evaluate while you're dieting. Goldman found that the relationship still my stable and happy over the longer term, where relationships in which the couple shared power, I would influence a ble. Big decisions like buying house overseas overseas trip by a car, having Children. But when Goldman drill down on this data, what he found Waas that women would generally pretty influence a ble. Yes, where the problem lies. Yeah, there's honey. Two options here.

Yeah, we men with the blind. The other thing that Goldman found is that men who are influence a ble also tended to be quote outstanding. Father's unquote So mitt So women. How influence a ble is your man men. You're with that because you respect. Make sure that respect plays out in the decision making process. That's right. That's right. I'm often intrigued by why couples come into seeming after they've been married for 30 or 40 years. This is the time when they're approaching the infirmities and illness of old age. It's a time when they're particularly focused on caring for each other. Don't forgive things that have bugged them for years. I'll forgive all betrayals, even Infidelities, because they're focused on caring for it.

So what brings what what pulls in the park? The best way I have for this is reliability or the lack thereof. Does your partner have your back? It takes two forms. Firstly, can you rely on your partner to do what they say they're going to do? Do they follow through? Secondly, if, for example, you're out of your being verbally attacked by somebody or you're suffering from a really disabling illness, does your partner step up and do what needs to be done to leave you feeling cared for and protected. And here's the rub. If you're facing old age and your partner isn't doing that for you, in fact, you're having to do that for them.

Then in an already fragile relationship, it can look a bit like you might be better off out of it. Robin in it. Sorry is your partner. Therefore, you when it really matters, not all the time, 80% of the time, but particularly if it's important on your side. Think carefully before you commit to do something for your partner. It is much better to commit to a CZ, much as you can follow. Throw them to commit to more sound good in the moment and then let them down. And if it's really important to your partner and you commit to it, make sure you move hell and high water to fill lights. Right now,

these are things that I'm saying. You look for that. Why these also things that can be built in existing relationships? I believe that the most important decision that you can make is who you choose as a life partner who you choose is the other parent of your Children. And of course, romance has to be. Their romance is a grand and beautiful and quirky thing, but we need to add to a romantic, loving heart and informed, thoughtful mind as we make the most important decision of our life. Thank you