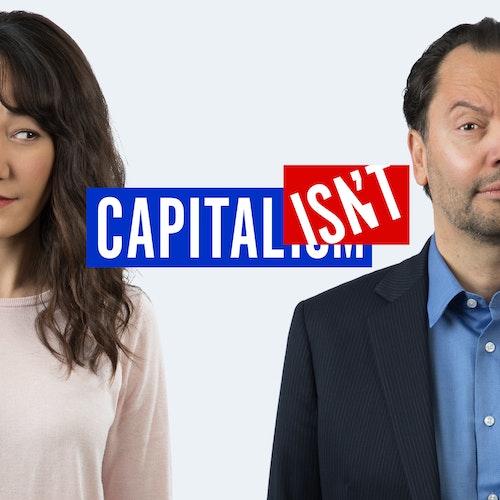 Capitalism is the engine of prosperity. Capitalism sows the seeds of its own demise. Could both be right? Economists Luigi Zingales (University of Chicago) and Kate Waldock (Georgetown) share the sort of irreverent banter you’d hear between economists at a bar, if economists were capable of sarcasm and social enough to go out to bars.

Are Workers Benefiting From The Union Boom?

Richard B. Freeman is a Professor of Economics at Harvard University and has been studying the role of labor unions in our economy for over forty years. His seminal publication, "What Do Unions Do?" (1984), concluded that unions are on balance beneficial for the economy and society, and remains one of the most widely cited books in this area of research.

Luigi and Bethany sit down with Freeman to ask: What do unions do today? How have technology, global competition, and the open economy led to their decline? And as seen by recent unionization moves at Amazon, Starbucks, and elsewhere, how real are the nascent signs of a comeback? They debate whether unions, both public and private, are robust ways to protect workers' rights moving forward, or whether government should instead focus on securing safety net systems such as minimum wage and unemployment insurance.

With inflation unfettered, Luigi and Bethany sit down with economist Ricardo Reis to discuss the Federal Reserve’s role. Contrary to our hosts’ views, Reis argues that while the Fed has made mistakes, they are largely understandable. Together, they chart why it took so long to pivot policies, how central banks responded to supply and energy shocks, how much the Fed – or Chair Jay Powell – is to blame, and what they should be doing to control inflation.

Plus, Bethany and Luigi discuss The Guardian exposé on the Uber Files, and what it teaches us about academic and journalistic accountability when it comes to corporate lobbying.

How Corporations Get Away With Crime + SCOTUS EPA Ruling

When it comes to corporate rulebreaking, data from 2002 to 2016 reveals that the US government arranged more than 400 "deferred protection agreements" as a means of deterrence. Under these, a company acknowledges what it did was wrong, pays a fine, promises not to misbehave for a period of time -- and thus is largely let off the hook. Columbia Law School Professor and author of "Corporate Crime and Punishment: The Crisis of Underenforcement", John C. Coffee, says these have done little to deter future wrongdoing.

Coffee joins Luigi and Bethany, both of whom have also extensively researched and exposed corporate wrongdoing, to discuss how to reform aspects of enforcement, such as self-reporting mechanisms, internal investigations, independent external auditors, whistleblowers, and even shame and humiliation.

Our last three guests on the show, Oren Cass, Francis Fukuyama, and Glenn Hubbard, have each brought forth their critiques and suggestions for how liberalism and neoliberalism work (or ought to work) in our society. In this episode, Bethany and Luigi reflect and take stock of how the political and economic components of these ideas might differ, where their promises have failed, and who has benefited from their messy implementation.

In the process, they try answering: What would a new version of (neo)liberalism look like?

Glenn Hubbard is Professor and Dean Emeritus at Columbia Business School, and also served as Chair of the U.S. Council of Economic Advisers, among others. In his new book, "The Wall and the Bridge: Fear and Opportunity in Disruption's Wake", he addresses the underlying forces behind the global populist anxiety by reimagining the process of "building bridges, not walls". He talks with Bethany and Luigi about trade, reforming social insurance, preparing the labor force for technological change, and the role of state, markets, and community in the economy.

For our Is/Isn't segment (43:44), Bethany and Luigi discuss the latest antitrust effort in the U.S. Congress to regulate Big Tech – the American Innovation and Choice Online Act, which could be up for a vote this summer.

Liberalism And Its Discontents With Francis Fukuyama + The Baby Formula Shortage

Francis Fukuyama is an American political scientist and author, notably of The End of History (1992) and Trust: Social Virtues and Creation of Prosperity (1995).

Now, in his new book, he offers liberalism as a solution to our current problems of social bifurcation, if paired with other functional institutions of a democracy.

Bethany and Luigi sit down with Fukuyama to understand: What does liberalism even mean? What are its excesses and its critiques from the progressive left? How dependent is it on traditional notions of growth and prosperity, and can it be implemented effectively in an unequal society?

What do lighthouses, the wheelie suitcase, Harry Potter, and Wikipedia have in common? They showcase the progressive evolution towards investment in the "intangible economy": one prioritizing knowledge, relationships, design, reputation, and other internal organization over physical assets.

Jonathan Haskel is Professor of Economics at Imperial College (London) and the co-author of a new book "Restarting the Future: How to Fix the Intangible Economy". Bethany and Luigi sit down with Haskel to discuss the characteristics and consequences of this economy, its value to society, the system of rewards and incentives behind it, and the role for government in regulating it.

They also discuss the leaked Supreme Court memo on Roe v. Wade and the extent to which corporate America should be weighing in on political debates. (49:46)

The basic premise of capitalism has always been that more people generating more profits will be better for everybody. Oren Cass wants to challenge that premise by prioritizing values over value and over market power.

Oren was formerly an Economic Advisor to the Mitt Romney Presidential Campaign, now executive director of the nonprofit American Compass and author of The Once and Future Worker: A Vision for the Renewal of Work in America (2018). A successful economy, according to him, should not be measured by consumption but by opportunities for all to be productive with a wide range of aptitudes and interests.

Luigi, Bethany, and Oren discuss what this means for replacing jobs with AI, China's economic relationship with the US, the idea of "Big Labor", and the interplay of neoliberalism with capitalism.

Ukraine: The Price of Democracy with Tymofiy Mylovanov

Since the start of the war in Ukraine, we've discussed its many aspects but we haven't talked to anyone actually in or from the country. On this episode, we do both. Ukrainian economist Tymofiy Mylovanov is the president of the Kyiv School of Economics, advisor to the Zelensky administration, and former Ukrainian Minister of Economic Development, Trade and Agriculture.

Mylovanov shares what has and hasn't surprised him about the war, reveals Russia’s other strategic advantages beyond energy resources, and offers a game theoretical approach to understanding the potential outcomes of this conflict. Along the way, he laments the cost of human lives as the price for democracy, and encourages us to remember history’s lessons.

As the devastation in Ukraine increases, so do the calls to end the war. Among those championing tougher actions is Bill Browder—one of Putin’s most vocal critics—and the man behind the Magnitsky Act, which authorizes the U.S. government to sanction human rights offenders.

Browder has been advocating for expanding the list of sanctioned pro-Kremlin Russian oligarchs. He prescribes that Western lawyers, bankers, and other enablers of these oligarchs should also be held responsible.

Ukraine: The Privatization of Sanctions with Richard Edelman

As the war in Ukraine continues, the world is responding not just with various government sanctions on Russia, but also with a voluntary exodus of private corporations from the Russian market. To discuss these "private sanctions" and possible motivations behind them, we invited Richard Edelman, the CEO of one of the largest public relations firms in the world.

Are firms profit-maximizing in their actions? Are they responding to political or consumer pressure? Or are they simply trying to avoid a public relations nightmare? Furthermore, do these actions constitute a precedent to be followed in future conflicts?

Ukraine: A Restart Of History

After the fall of the Berlin Wall, political scientist Francis Fukuyama famously proclaimed the "end of history" and of humankind’s ideological evolution. The combination of Western liberal democracy and capitalism were seen as the final, convergent form of global human organization — surpassing geopolitical considerations.

As Russia invades Ukraine, history seems to have restarted. This time the tension is not between capitalism and socialism, but between liberal capitalism and autocratic capitalism, between globalism and nativism, between a state subordinated to economic interests and economic interests subordinated to the state. Amidst this unfolding situation, Luigi and Bethany discuss how sanctions, SWIFT, the energy sector, digital platforms, new geopolitical blocks, and more are coming together to possibly reshape the course of history.