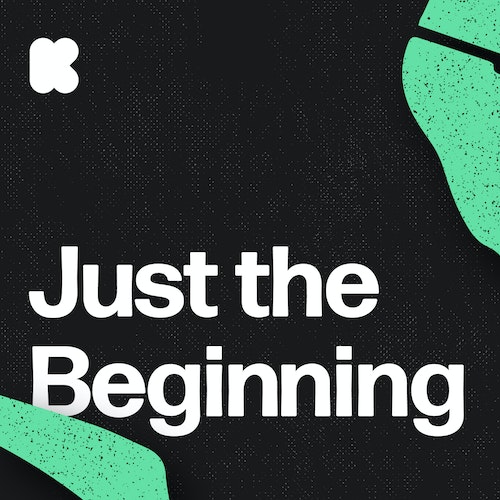 This is Just the Beginning, a new podcast from Kickstarter featuring stories about how independent creators bring their ideas to life.

Meet an engineer turning air pollution into ink, a married couple who invented a device that lets you sing like a robot, an artist touring the US in a mobile tattoo shop for women, and other creative people of all kinds. You’ll hear what inspires them, scares them, and keeps them going—and how they’ve remained true to their visions, even if mainstream culture didn't buy in.

The View From Somewhere

If there’s anything you know about journalists, it’s probably that they’re supposed to be objective: relating just the facts, with no personal bias. But is that really possible—or a good thing to strive for—in the “post-truth” world we’re currently living in?

For this bonus episode of Just the Beginning, we’re sharing the first episode of The View from Somewhere, a podcast about journalism with a purpose, produced by Lewis Raven Wallace and Ramona Martinez. In it, Lewis shares the story of losing his job after raising questions about the value of journalistic objectivity.

If you like what you hear, head to lewispants.com to listen to more episodes of_The View from Somewhere ._

And help them make more episodes by backing their Kickstarter campaign, which is live until February 6th.

If you had to make a playlist that represented life on Earth, what would you include?

That’s challenge a team of artists, scientists and musicologists led by astronomer Carl Sagan set for themselves in 1977. They compiled a gold-plated record of greetings, sounds, and music representing life on this planet, and sent it into space on NASA’s Voyager probes. The intended audience was extraterrestrials who might discover these spacecraft and wonder who sent them. That’s right, it was a mix tape for aliens.

This bonus episode of Just the Beginning features a story from our friends at the podcast Twenty Thousand Hertz, breaking down the Voyager Golden Record track by track. You’ll hear music from around the work as well as interviews with Tim Ferris and Linda Salzman Sagan, two of the folks who produced the record.

This story was produced by Leigh McDonald and Dallas Taylor with help from Sam Schneble and was sound designed and mixed by Nick Spradlin.

Twenty Thousand Hertz is produced out of the studios of Defacto Sound, and hosted by Dallas Taylor.

Why are wild animals the key to making fighter jets more exciting on-screen? Who bailed out Stanley Kubrick when his epic battle sequence sounded like pots and pans? And what did Jacques Cousteau have in common with Darth Vader?

Making Waves: The Art of Cinematic Sound, a groundbreaking new documentary, covers all this and more as it introduces us to the often unsung heroes of Hollywood sound design.

Liz Cook Mowe, Kickstarter’s Director of Documentary Film, presents this preview of Making Waves along with filmmakers Midge Costin, Bobette Buster, and Karen Johnson. They explain how sound is as powerful a cinematic storytelling tool as images and share some of their favorite stories about creative uses of sound in film—from King Kong to Barbra Streisand.

Learn more about Making Waves: The Art of Cinematic Sound  and find a screening near you.

In this episode, we explore creative projects that attempt to reconstruct the past—at least a version of it. Plus, we take a look back at some personal moments from the first 10 years of Kickstarter, as told by creators and backers.

Interdisciplinary artist Alison S.M. Kobayashi came across a seemingly mundane audio recording of a family gathering in 1950s Long Island. It was garbled, filled with obscure references, and she set out to unlock its mysteries. Her unique one-woman show, based on six years of research on this recording, has garnered rave reviews and played to sold-out audiences since 2017.

Norbert Stern’s career as one of the most promising concert pianists in 1930s Europe was cut short when he and his family were captured by the Nazis, along with other Jews, and sent to Auschwitz, where they ultimately perished. His nephew Roger Peltzman, an acclaimed pianist himself, decided to travel to Brussels to record a program of the Chopin pieces that were Norbert’s speciality in the concert hall where he regularly performed.

To help us celebrate our 10th birthday, we asked some other creators who have brought ideas to life with Kickstarter to share some memories—snapshots from different points in their Journeys. Here’s who we heard from:

Gifts From the Grave

Peter Hicks tells the story of what happened when he introduced Kickstarter to his father, Ray Hicks.

Sadly, this is the last episode of Just the Beginning featuring producer and cohost Zakiya Gibbons. She’s off to work with WNYC’s wonderful podcast Nancy. She'll also continue her work building a directory of people of color working in the audio industry(site coming soon!).

Founded by industry veterans who have previously helped run The Wall Street Journal and the BBC, Tortoise aims to create a new kind of newsroom—one that takes a slower, deeper approach to covering stories. With an eye toward staying financially independent, they’ve pursued a participatory, membership-based model. And they invite members to directly contribute to their coverage through in-person events called ThinkIns.

Alejandra Sánchez Inzunza and José Luis Pardo Veiras have been reporting on corruption and violence throughout Latin America since 2012, working with traditional news outlets like The New York Times and Univision. With Cabina en Malos Pasos, an interactive video booth that features firsthand accounts of survivors, activists, and perpetrators, they aim to inspire empathy and make the often amorphous issue of violence in Latin America feel more personal.

Join us to listen to some podcasts made by Kickstarter creators.

The bestselling Goodnight Stories for Rebel Girls books tell stories of extraordinary women from the past and present in the form of lushly illustrated fairy tales. For their podcast, they invite notable contemporary women to read these stories. We’ll hear an excerpt from an episode featuring actress and comedian Pamela Adlon telling the story of painter Frida Kahlo.

In the early 1970’s, author Studs Terkel went around the country with a tape recorder interviewing people about their jobs for his book Working. Working with Project& and the Studs Terkel Radio Archive, the Radio Diaries team took those source tapes and turned them into radio pieces, allowing us to hear the voices of many of Terkel’s interview subjects for the first time. We’ll hear stories from a private investigator, a police officer, and an advertising executive.

Meet creators making work that explores the gap between science fiction and reality.

Join us for an audio road trip to two places that were created with the help of Kickstarter backers.


Find a full transcript with photos and bonus content here.

"Pollution is nothing but resources we're not harvesting. We allow them to disperse because we've been ignorant of their value.

What does it mean to sound more like yourself?

Stories about what happens when bringing a creative project to life becomes your life.


Music in this episode:


Find a full transcript with photos and bonus content here.

Series Preview: This Is Just The Beginning

This is Just the Beginning, a new podcast from Kickstarter featuring stories about how independent creators bring their ideas to life.

Join us for an honest conversation about the value of creative work. How it challenges us—and empowers us to challenge authority.

How it helps us face the hard truths of the world—and sometimes escape them. We’ll hear directly from creators about what inspires them, scares them, and keeps them going.

Subscribe now and catch our first episode on Thursday, January 24. You’ll hear a new one every two weeks.

This series preview features the voices of:

Our theme music is by Balún. Find their music here.

Grow Your Audience. Submit your podcast ->