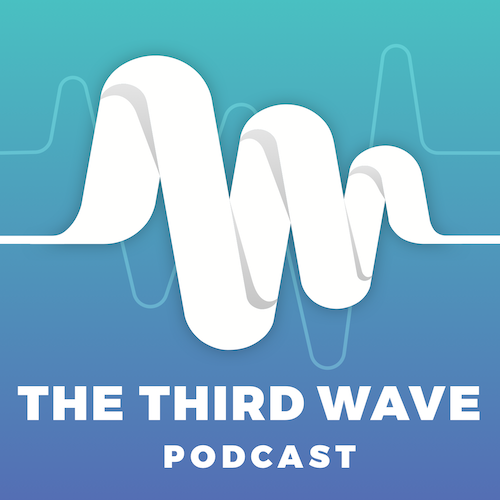 The Third Wave Podcast explores the many minds of the emerging psychedelic renaissance. Through conversations with thought leaders across various disciplines, we explore how psychedelics, when used with intention and responsibility, catalyze transformation on both an individual and collective level.

Are you a newbie fresh off an incredible first psychedelic experience? An experienced psychonaut with decades of use? Or just an interested bystander, curious about the relevance of psychedelics to health and wellness?

Regardless of your why, our podcast gives you a unique look into how psychedelic substances change culture and society for the better.

This podcast features an intellectually orgasmic conversation between Paul F. Austin, founder of The Third Wave, and Louie Schwartzberg, the award-winning producer, director, and cinematographer responsible for the breakaway film, Fantastic Fungi.

Tune in to hear what they have to say about the creation and grassroots promotion of Fantastic Fungi, the power of a personal mycelial network to bring people together, the role of the back to the land movement, finding wonder and awe, and growing your own tomatoes.

Tania de Jong AM is a trail-blazing Australian soprano, global speaker, and award-winning social entrepreneur who has developed five businesses and three charities—including Mind Medicine Australia, which supports psychedelic-assisted psychotherapy for the treatment of mental illness.

In this wide-ranging podcast, she and Paul F. Austin talk about mental health, surviving trauma, the mind-altering power of music, catapulting into the cosmos with psychedelics, kangaroos, and folding umbrellas.

Julie Holland, M.D. Psychedelics And Activation Of The Parasympathetic State

Dr. Julie Holland—a psychiatrist specializing in psychopharmacology and author of the recently-released book, Good Chemistry: The Science of Connection From Soul to Psychedelics—riffs with Paul F. Austin on oxytocin, music, death, and using psychedelics to activate our parasympathetic state of being.

Get ready for a ride that covers topics ranging from The Very Hungry Caterpillar to MDMA, cannabis, and PTSD.

Dr. Molly Maloof—physician, nutritional consultant, and popular speaker—chats with Paul Austin on how to boost our immunity and foster neuroplasticity through psychedelics, meditation, and healthier lifestyle choices.

Tune in to discover some steps you can take to improve your physical and mental wellbeing as you navigate the current period of uncertainty and heightened anxiety.

Peter traversed the start-up road for the past ten years, bootstrapping his digital agency to a multi-million dollar exit. Listen in as Peter explains why his search for money, status, and achievement led to a developmental dead-end - and how his perspectives changed from intentional plant medicine use.

Host Paul F. Austin sits down with Greg Ferenstein, a data scientist and social ethnographer who has explored the cutting-edge of modern microdosing use by devising a comprehensive system for tracking real-time transformation with psychedelics.

Daragh Crowley, certified rolfer and movement enthusiast, sits down with host Paul F. Austin to discuss why healing the physical body is central to becoming whole and what role rolfing, movement, and psychedelics play in this process.

Dr. David Luke, a senior lecturer and psychedelic weirdness extraordinare, sits down with host Paul F. Austin to discuss synesthesia, shared hallucinations, and why telepathy might actually be possible with smokable DMT.

Philippa Wilkin, transformational leadership coach and breathwork facilitator, sits down with host Paul F. Austin to discuss existential crises, why breathwork helps to integrate repressed emotions, and how consistently live in a state of presence.

Dr. Ben Sessa On Mdma, Healing Trauma, And The Future Of Psychiatry

Dr. Ben Sessa, consultant psychiatrist and author of “The Psychedelic Renaissance”, sits down with host Paul F. Austin to discuss his recent MDMA trials for alcoholism, how Ben became the first person to legally take psychedelics in the UK since the 60s, and why MDMA is so good at healing core attachment-based trauma.

Hacking Consciousness Without The Drugs

Listen to a live podcast panel entitled: "Without the Drugs: Modalities for Hacking Consciousness" brought to you by The Third Wave.

Dr. David Rabin, Daniel Cortez, and Brooke Deputy join Paul Austin for a far-ranging conversation about the utility of non-ordinary states in healing and transformation.

Learn about the Thank You Plant Medicine movement from the two co-founders David Grillot and Jonathan Glazer.