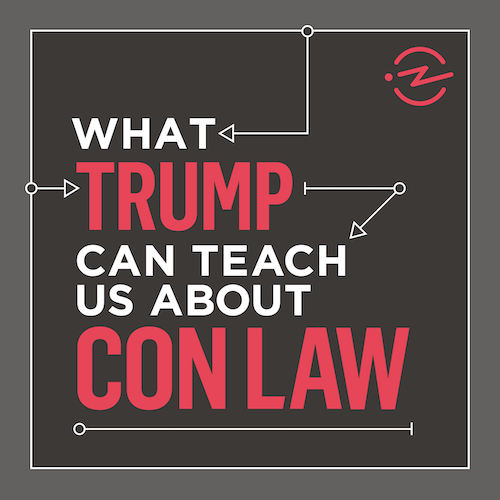 What Trump Can Teach Us About Con Law podcast.

Professor Elizabeth Joh teaches Intro to Constitutional Law and most of the time this is a pretty straight forward job. But with Trump in office, everything has changed. Five minutes before class Professor Joh checks Twitter to find out what the 45th President has said and how it jibes with 200 years of the judicial branch interpreting and ruling on the Constitution. Hosted by acclaimed podcaster Roman Mars (99% Invisible, co-founder Radiotopia), this show is a weekly, fun, casual Con Law 101 class that uses the tumultuous and erratic activities of the executive branch under Trump to teach us all about the US Constitution. Proud member of Radiotopia from PRX.

As people around the world continue to protest police brutality, Republicans and Democrats in Congress have proposed bills that would reform policing across the U.S. But in the American system, states are given a lot of latitude over law enforcement, down to the use of tactics like chokeholds and tear gas. Given the constitution, what can the federal government actually do to make things better? Also, why was the ever-obscure Third Amendment trending last month?

The Supreme Court may not be able to meet in person, but they are still doing business over conference call. This month, they've considered three cases about Donald Trump's finances, and whether they should be released to Congressional committees and prosecutors in New York. What does history tell us about these cases which could have major consequences for executive power?

In mid-April, 2020, states are beginning to explore ways to re-open their economies amid the global coronavirus pandemic. But with states devising their own paths forward, many are wondering what powers the government has, even during a national emergency. Are the states violating our civil liberties by enforcing these lockdowns? To answer this question, many legal scholars are looking to a 115-year-old Supreme Court case for answers, Jacobson v. Massachusetts.

During a health crisis, what is the government allowed to do? As the novel coronavirus spreads across America, there have been closures and lockdowns across the country. In this episode, we look to history to understand who has the power to quarantine, and how the office of the president can be used to slow down a pandemic.

Prosecutors recommended that Roger Stone, an associate of Donald Trump, be given a heavy penalty after being convicted of seven felony counts, including lying to authorities. But after intervention from Attorney General Barr, and tweets from the President, those recommendations were rescinded. What can his case tell us about presidential interference and prosecutorial discretion?

After Donald Trump ordered the killing of Iranian general Qasem Soleimani, many wondered if the two countries were on the brink of a major conflict. This incident is only the latest in the long-standing fight between Congress and the President over who has the power to make war, and if an act of violence against another state can be legitimate without Congressional approval.

This episode also includes an update on the Senate impeachment trial of Donald Trump, which began earlier this week.

Make your mark. Donate at http://radiotopia.fm

Bribery is one of the three offenses listed in the Constitution as grounds for impeachment. Even though that is attempting to bribe Ukraine is the act that precipitated to Trump’s impeachment, it’s not explicitly listed in the articles of impeachment. Why is that?

Make your mark. Go to radiotopia.fm to donate today.

Since the beginning of the impeachment proceedings against the President, Donald Trump has insisted he has a right to confront “the whistleblower,” the anonymous member of the intelligence community who set the whole thing in motion. There is a Confrontation Clause in the Sixth Amendment of the United States Constitution, which says a defendant in a criminal case has the right to face their accuser. But does this clause apply to the impeachment hearing against a president in Congress?

Donald Trump says he should not be impeached as President, since there was ‘no quid pro quo’ on a phone call where he asked the Ukrainian president to investigate a political rival, former Vice President Joe Biden. But does quid pro quo need to be explicitly stated to be a legal issue? And can private citizens like Rudy Giuliani represent America on foreign policy issues?

Get the new Shredders album from Doomtree!

Trump lawyers assert that all of Trump’s actions during the Mueller investigation were within his rights as President and can’t be classified as obstruction of justice, especially because there is no underlying crime alleged. But as Martha Stewart will tell you, that’s not how obstruction of justice works.

Get the new Shredders album from Doomtree!

What is Congress’ contempt power and how can they use it to force people to cooperate with their investigations?