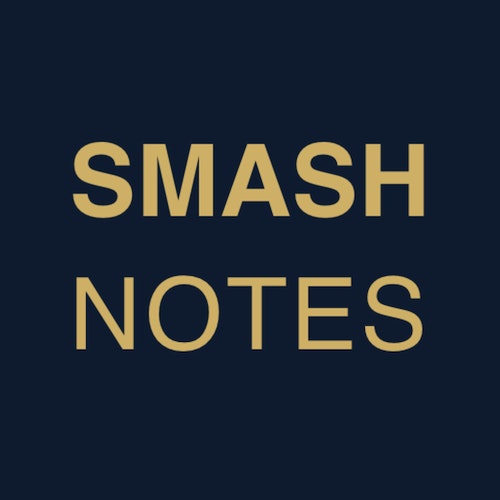 This week's episode of Smash Notes features serious science, health, entrepreneurship and money. Listen and you will find out why sleep is actually extremely important for your body, why Melinda Gates nearly quit Microsoft, how a tiny startup is saving our planet and more.

At the end of the episode you will also get to hear a music piece by Cade Legat. If you are into Dance & EDM, you just might digg it. Take a listen and enjoy!

What is covered in the Smash Notes Podcast for week 19 of 2019?
Can I just listen to Wave by Cade Legat please?
download episode
0:1

thesis MASH notes A podcast that brings you weekly summary off the best podcast on the Internet. In this episode, you will hear why sleep so crucial to our body in line How Mill in the Gates created a culture of empowerment and Microsoft

What Matt Oppenheimer thinks about self doubt, how to save the planet and more. Take a look at the show notes for details. Also, from now on, every episode of Smash Nails will feature music artist You're here listening to my friend Kate Leg. If you like this, the rest of the songs at the end of the episode Now let's get right to it.

Men, if you need one reason to sleep better at night, here's professor map Walker from UC Berkeley. Men who sleep five hours a night have significantly smaller testicles than those who sleep seven hours or more. In addition, men who routinely sleep just 4 to 5 hours a night will have a level of testosterone, which is that of someone 10 years their senior. So a lack of sleep will age a man by a decade in terms of that critical aspect of wellness. Next up is Thea's recline show from box media. This is an episode with Melinda Gates, where she talks about how to create a company college over your employees do not fear to speak up instead, have productive, intelligent discussions. Yeah, and just so nobody's confused. I love love an intellectual debate, and I have a lot of intellectual debates at home.

As you can imagine, I have a spouse who's quite intellectual, but the combative culture I didn't really like and it felt like the arguments weren't just about that intellectual thing. They felt personal sometimes, and I finally realized that know what I needed to do was to be myself and be who I was. And as I rose up in the ranks that Microsoft I ended up running a team of over 1800 people. When you all the products that are under me, I could end up getting people say, How in the world did you get that amazing developer off the operating system work on your product? Or that you know, that amazing, talented woman or man and say, Well, we must have created a culture that people just like to work in, and I supported people in very tough meetings of Eagle. You know,

tough intellectual debates, but they're not personal. And there they're supportive of people and their careers. And I think you can nuance that right so that you get the best out of people and you get all the best ideas on the table. Because if you don't do that, you actually leave innovative ideas off the table because people get afraid and they don't want to put their idea out there because they might be criticized. Did you know that as possible to make fuel from water and carbon? Anyone know Google have failed with this? A tiny startup called Prometheus could be our in such a climate change. Full story on decrypted by Bloomberg Technology What's cool about this is it's reverse combustion, right? So when you burn fuel, you make water, carbon dioxide and energy, and those three things could be combined back into into gasoline. But the byproducts oxygen.

So this thing is like a little mechanical forest, just like trees. Rob's machine would remove carbon dioxide from the I contacted Matt Iseman, who was the technical lead on foghorn for Google. He's advising Robin. I was interested in what he had to say about Prometheus. Prometheus stood out to Matt because of advances Rob had made in material sciences a lot of startups and now tackling a field called Elder Tech. But is that a good business? Vincent Shu from Initialized Capital has the answer. There's no you know, there's no doubt that if you can spend a dollar in terms of companionship and save 5 to $10 in terms of an early hospitalization or, you know, maybe being ableto observe somebody and prevent a fall by understanding how they walk before they even begin, Thio deteriorate too far. I think you know, insurance companies are very,

very interested in this. And do the best CEOs ever doubt themselves. Let's find out from Mad Oppenheimer, the sea over minutely Seattle company that's now over 800 people with four offices around the world. Match it now. Well, the first part of self doubt Absolutely. I think that anybody who doesn't who says they have no self doubt, I'm skeptical that I, at least comptel you have self doubt all the time. And that was not just the beginning of the business that goes through every day of every year, and I like that. I'm being stretched, but with being stretched definitely comes like self doubt that actually, while we're on that topic, I try to be pretty mean.

My job seven years later, with close to 800 people worldwide. But every year what I do says my job is so different is I do with unorganized 360 and I put together a development plan and I share that development plan with, you know, a broad set of folks. I went through it verbally with the entire company, so I think it's important to lead by example that, like it, maybe it's the other side of self doubt, but more importantly, like we're all growing and developing. And that's a big part of why. At least I'm doing a startup is my own. It's personal growth and development reason everyone is making a positive impact on people's lives. Reason number two and I'm very intentional about it is my own growth development. Did you know that Amazon's going to spend $800 million this year to upgrade its prime members from a two day delivery to a one day free shipping that got Wall Street really excited and more on the story from geek y yeah,

fun fact that I just learned this week when I was working on stories that Prime is actually like 14 years old. Most of that time, the core benefit has been free two day shipping on many items, even as they've added more goodies along the way. Why would Amazon want, at this point in its evolution to shift the core benefit from two day shipping to one day shipping? Well, at this point, a lot of the retailers have caught up, especially the big ones. Target Walmart. Some of these others they all have limited versions of two day shipping, but they also have their big networks of stores that they can basically turn into these little mini for fulfillment centers they can do. Amazon can't really match those cause. They don't have the same footprint of stores that a target or a Walmart might. They have to find another way to get ahead.

Another way to set the standard, and it appears they've settled on one day shipping. Is that new Bush? Last but not least, is Chris Orhan. In sharing the secret to business success, there's one word. Relationships in business you know, relationships become critical. We have a client base that comes back over and over again. Wolf. You didn't have good relationships if you didn't. You know, if you weren't proactive about issues or stay communicating all the time and whether it's a corporate client where, yes, there's more repetitive interaction or a leisure client that you may only,

you know, do a trip for once a year. Relationships are so important in business. I wouldn't have my business today if it wasn't for the relationship that I had, where they'd know me well enough to say this was a worthwhile endeavor on their part. This concludes our summary for this week. Please go to smash nose dot com and subscribe, and now it's promised music piece by Kate like Enjoy and See You next month.